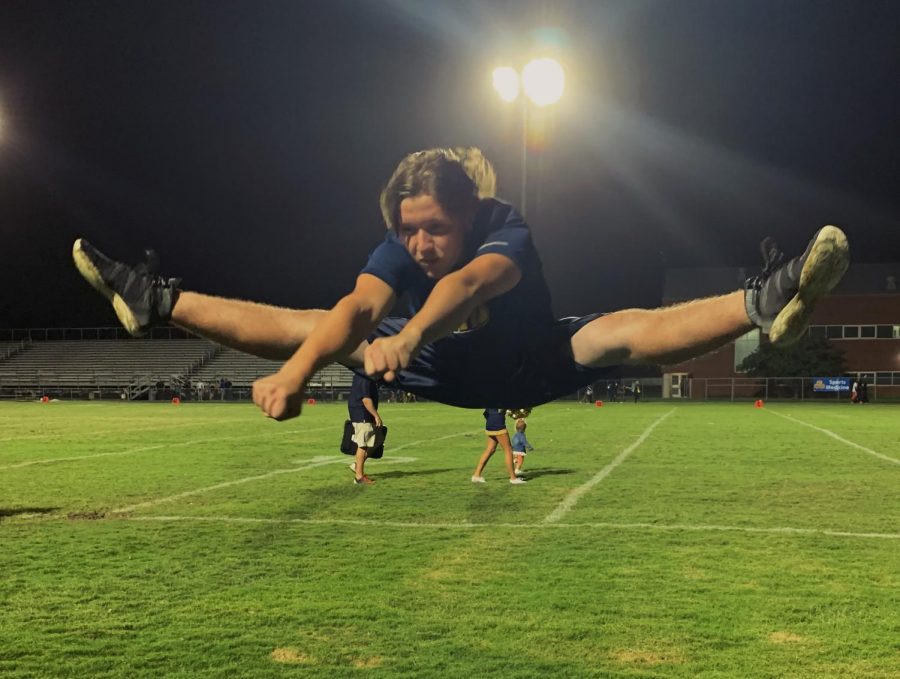 “Five, six, seven, eight,” said Isaiah Alspaugh as he performs a double toe touch on the sidelines of a varsity football game. Isaiah, a sophomore, is the first male sideline cheerleader in Ocean Lakes history.

He has tumbled since he was five, but this year, Isaiah celebrates his first year as a varsity sideline cheerleader and a second-year competitive cheerleader. He has been a cheerleader for four years.

“Watching my sister’s team perform at a competition inspired me to start cheerleading. I had been participating in gymnastics at the time,” said Isaiah.

Dillan could not be more proud of her brother.

“Isaiah has a lot of natural talent…but I believe what sets him apart is how he works and how much of a team player he is. He really wants what’s best for everyone and supports his teammates, and you can tell just by the way he talks about cheer at home. As a brother, he’s always been my personal cheerleader,” said Dillan, a recent graduate who now attends James Madison University.

His high-skilled tumbling also moves the crowd and creates hype, and his positive attitude radiates from his face.

“He’s brought a lot to our team. He’s brought his tumbling, his vocals, his skill. But these assets aren’t the only thing he’s brought to the team, he’s brought his electric personality,” said senior Sam Bobulinski. “He’s always making jokes and trying to lighten the intensity of our practices. He’s a great teammate and has really helped the team grow and step up our game.”

Isaiah also participates in theatre with a roll in the fall production of Shakespeare’s Taming of the Shrew. Between cheer, the fall production, and schoolwork, this student athlete stays busy. Luckily, for him, cheer helps him cope with his fast-paced life.

“Cheer has made a big difference in my life because tumbling is a way I cope with stress,” said Isaiah.