Every 15 minutes program seeks to raise awareness about dangerous driving 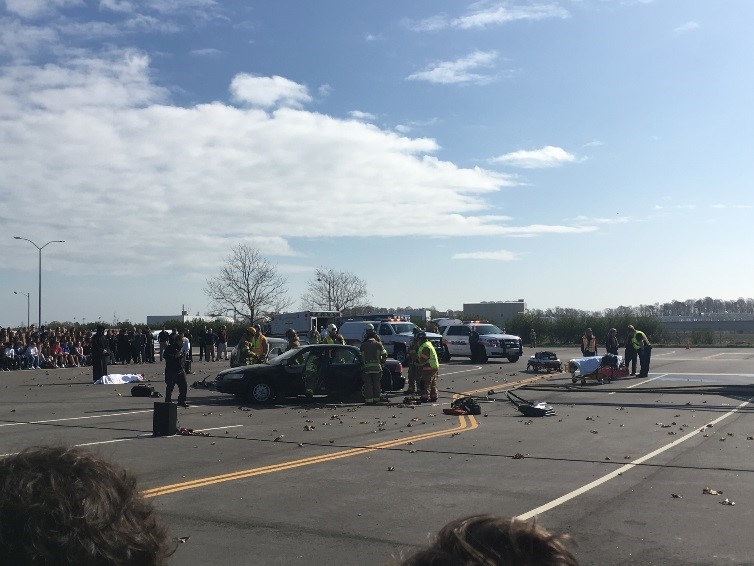 Firefighters work to get the passenger out of the car at the mock car accident.

The Every 15 Minutes program was named due to the fact that when the program was first implemented, every 15 minutes someone in America was killed in an alcohol related crash.

According to Edgar Snyder and Associates, one in four teen car accidents that are fatal involve underage drinking and driving.

“I enjoy sponsoring this program because I get to know students outside the classroom, along with their families, and the impact it has,” said the teacher who oversees the program, Leslie Samuelson.

The planning for this program starts a long time before students get to see the outcome. Filming was spread out over about a month, and the film was shown to the school March 30.

In the week prior to the event being held at school, there was a display table in the cafeteria during lunches. The purpose of it was to teach kids about distracted driving and decision making.

“As high school students getting their permits and licenses, we are so susceptible to peer pressure,” said senior Trevor McDonald. “This program helps show these students how your actions while operating an automobile can affect you and your family’s lives forever.”

The mock crash, held near the student parking lot, involved several police cars, ambulances, firetrucks, and even a helicopter.

After students witnessed the mock crash, the participants of the program were taken to the hospital to see how the trauma team would operate in a similar situation, the morgue, where the parents of the dead teenager had to identify the body, the correctional facility to see a mock trial, and finally to a hotel, where they stayed for the night to make the experience more realistic.

At the assembly in the auditorium, students in the program reunited with their parents after 24 hours of communication being cut off. One student and one parent was chosen to read the letters they wrote to the other. The student chosen to read their letter was sophomore Jordyn Gunter.

“Every 15 minutes is something I will always remember. It impacted my life as well as others, which is one of the reasons why I wanted to participate in this program. My goal in life is to make a difference and help others, and I believe Every 15 minutes showed an amazing outcome of distracted driving,” said Jordyn.

A living example of how alcohol related crashes can impact lives was shown by Karen Pyle, who shared her story at the assembly. She has been a part of the program since 1999 and was in a head on collision with a combined speed of 100 mph. She was knocked unconscious on impact and was in a coma for three weeks.

“I may have mended, but I will never be the same,” said Pyle.

She received a broken left cheekbone with a skull fracture, severe brain injury, a shattered right wrist, and several other injuries. She was in rehab for four months.

Captain Adams, the commanding officer of special operations, said the program “provides a somber reality of what can happen if we make bad judgments.”