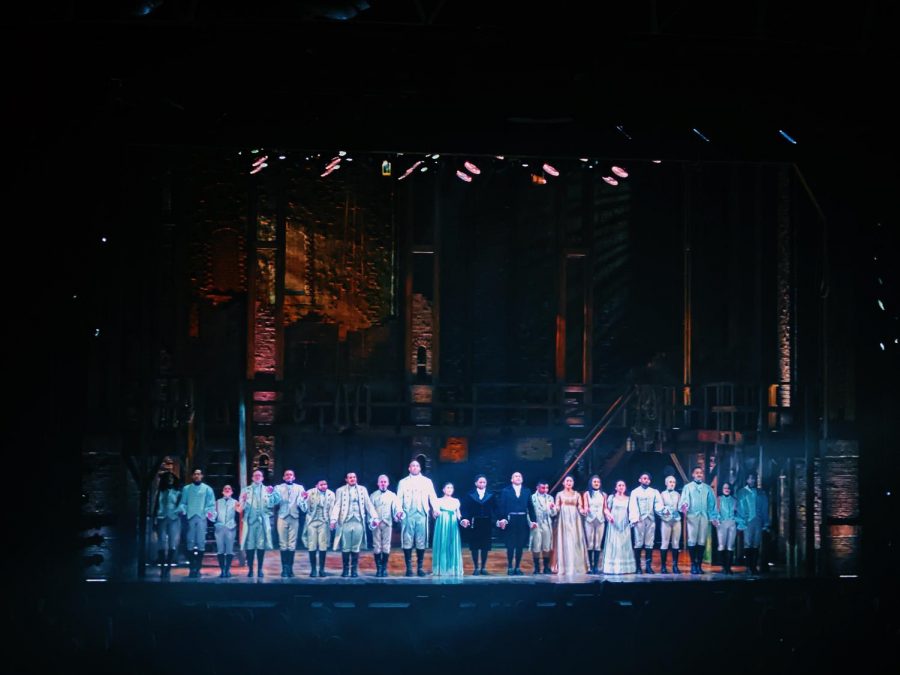 The cast of Hamilton takes a bow after a successful show. Dec 19.

The hit Broadway musical “Hamilton” dominated the Chrysler Hall stage to give another Pulitzer Prize-winning performance. Once the musical finished its run on Broadway, the original cast stepped down and allowed the touring cast to begin performing in different locations around the country, making its way to the 757.

“Hamilton” is a musical about the life of “the ten-dollar Founding Father,” Alexander Hamilton, created and composed by New York native and Tony Award winner Lin-Manuel Miranda.  Miranda also created Hispanic American songs in the Tony award-winning musical “In the Heights.”

Miranda incorporates many show-stopping songs in this hip-hop inspired musical, such as the popular and inspirational “My Shot” and the humorous contemporary piece “You’ll be back.”

The narrative highlights the trials and tribulations that founding father Alexander Hamilton experienced from his birth as an illegitimate child to his inevitable death at the hands of then-Vice President Aaron Burr.

Tickets sold quickly due to the musical’s popularity within the public, which it earned thanks to its urban feel and modern take on American history.

Additionally, Miranda’s incorporation of a diverse cast highlights the individuality of each character in the show and creates a unique performance. For example, the fact that both Frenchman Marquis de Lafayette and Thomas Jefferson were portrayed by Daveed Diggs, an African-American man, in the original cast exemplifies how different this musical is when compared to conventional standards.

Although this particular musical would satisfy a history buff with a diverse taste in music, this can be as gripping and rousing to someone who would have little knowledge of Alexander Hamilton and what he contributed to the formation of the United States.