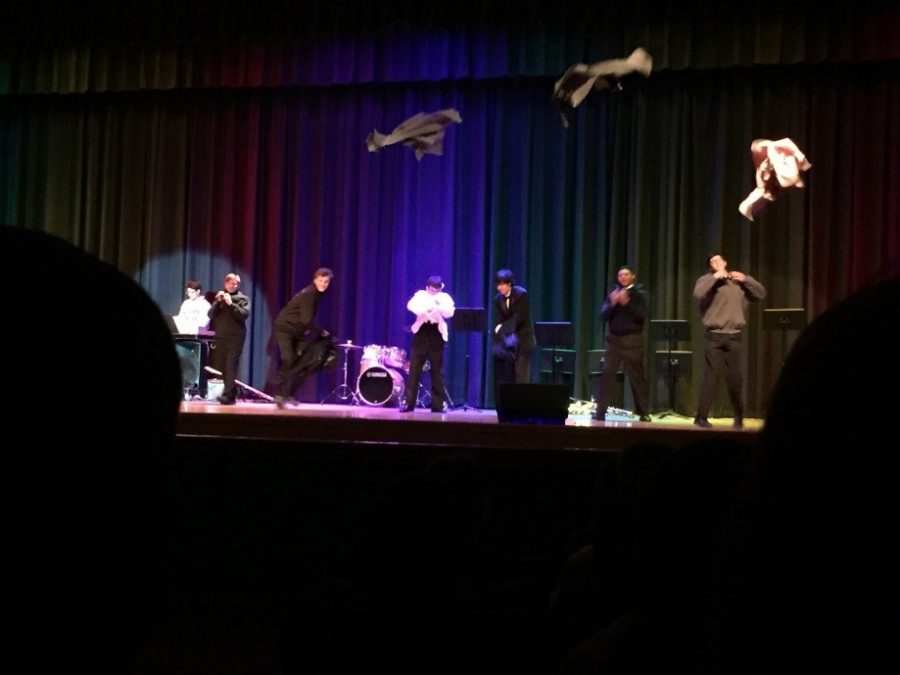 Senior contestant Adam Yi and his back-up band members rip off their coats during the talent portion of the Mr. Ocean Lakes pageant. Adam was awarded People's Choice.

The annual Mr. Ocean Lakes pageant was held on March 30 for staff, parent, and community spectators.

The show typically includes ten male contestants, each accompanied by a female escort. Contestants and escorts are selected to participate by the Student Cooperative Association (SCA) Executive Board members who are in charge of planning and running the event.

“We had a wonderful cast and crew to work with,” said SCA Events Gold committee member and senior Kelly Wiegand. “Everyone is so talented and a joy to be around.”

The 2017 competition, entitled “Mr. OL: Grease Edition,” featured music and dances from the 1970’s film, as well as costumes similar to those that the movie characters wore.

The show began with a contestant dance to the song We Go Together and continued on with contestant and escort introductions, as well as various sportsmanship competitions. Following the team competitions, each contestant demonstrated a special talent for the audience; performances included dancing, singing, lip-singing, playing an instrument, and even martial arts.

The show concluded with the song You’re the One that I Want, a question and answer portion, and the crowning ceremony for various awards.

One contestant responded to why he wanted to participate in this year’s event.

“I want to inspire people to do what they never dreamed possible,” said senior Troy Shafer.

At the end of the night, four contestant awards and one escort award were presented to the winners. Senior Isis Cowan won the most valuable escort award for her continuous dedication throughout the process, and her partner and junior Elijah Edwards were presented with the Mr. Congeniality award for his personality on and off stage.

Senior Marcelo Sleiman was awarded Director’s Choice, chosen by the SCA Events Gold committee for his supportive attitude at all event practices.

Senior Adam Yi was People’s Choice, as he received the most votes from the audience, but junior Jake Brown was ultimately crowned Mr. Ocean Lakes 2017.

“When they announced my name, I was honestly taken aback,” said Jake. “I had the best night ever, and I can’t wait to be back next year.”