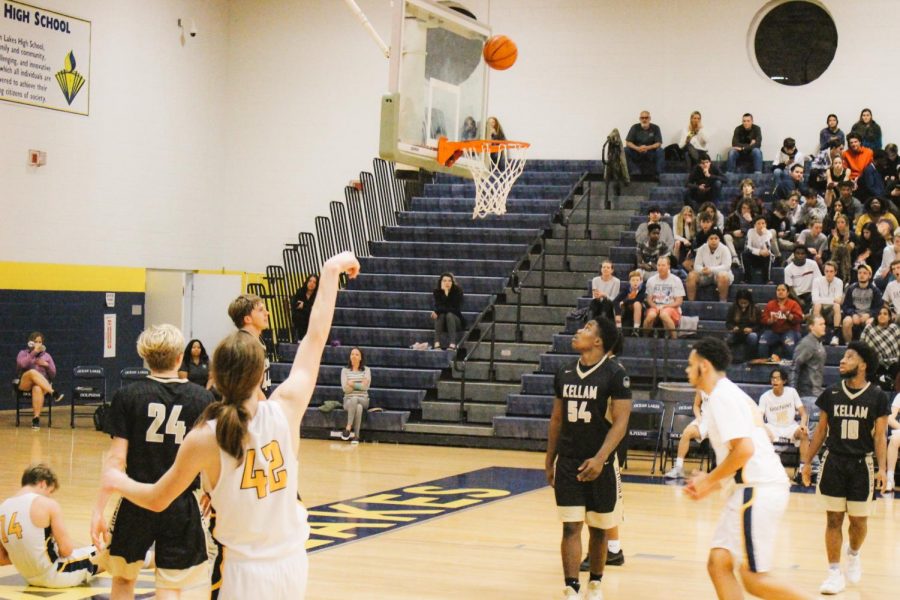 Hustler, goofball, and hard-worker. Three words to describe freshman basketball player Finnegan Copen, at least according to teammate Jordan Hall. Within the six months of high school, Finn shimmied his way into the hearts of his peers when he made the varsity basketball team.

“The first thing that stood out about Finn was his passing ability. Once given the opportunity he proved to be a consistent three-point shooter and aggressive rebounder,” said varsity basketball coach Nic Mace.

Not only does his athletic ability translate onto the basketball court, but he shines on the volleyball court as well.

“When I first met Finn, I already knew he was going to be important to our team,” said volleyball teammate Nicholas Bond. “He had obvious talent and quickly improved throughout the season.”

Finn has put in the work to compete on the same level as his older teammates while also balancing commitments to other sports and his academics. Despite his young age, he is respected by his teammates, coaches, and opponents.

“Finn’s ability to knock down open shots and space the floor effectively helped him earn a starting position. His high motor and rebounding efforts have helped him maintain that position,” said Mace.

Finn has played baseball, volleyball, and basketball since he was three and uses sports as a way to improve his leadership skills and expand his social circle.

“[Playing sports] helps me work with people that I don’t know, and I get to work on other skills as well,” said Finnegan.

In addition to his athletics, Finn’s passions are space and science. The decision to attend the Math and Science Academy was fueled by his hopes of becoming an astrophysicist in the future.

“Bill Nye and Neil DeGrasse Tyson got me into space and science. I love space; it’s so fascinating. There are so many phenomena in the universe and it’s really cool,” said Finn.

The time commitment can be strenuous, and balance is important. When his mind is not on school or sports, he spends his free time decompressing.

“I lay around typically, or I play video games,” said Finn. “My favorite video game is Call of Duty: Modern Warfare… and sometimes I can play for hours on end.”

For anyone in his position, Finn shares a few pieces of advice.

“Show your coach what you can do. Don’t try to be someone you aren’t. Work hard, practice, and your work will pay off,” said Finn.