Finsta vs. Rinsta: Teenagers use “finstas” as an outlet 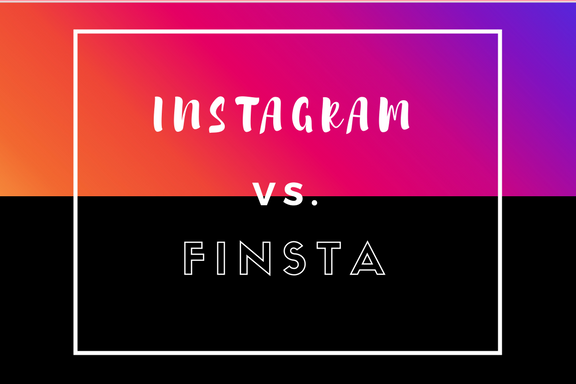 Over the past year, the popularity of the “finsta” increased enormously. Unlike the traditional Instagram format, teenagers create alternate profiles in order to post pictures and information they wouldn’t share with everyone that follows their traditional account.
“A Finsta is an alternate, more private and personal Instagram account,” said senior Laura Grabarczyk.

Despite the fact that the traditional Instagram format depicts a digital representation of the individual that created the profile, more frequently that depiction is tainted by the need for perfection. The necessity for the perfect photo and the most artsy feed is a real dilemma amongst teenagers this day. “Finstas” allow teenagers to post imperfect pictures to their closest friends. Last year in SCA block, adviser and English teacher Katherine Anderson first heard about finstas.“Insta is your public persona. Finsta is everyday things you want to hide from your parents,” said Katherine Anderson. “It’s more carefully monitored–only some can follow it.”

The problem that often occurs with Finsta is the fact that it creates an unreal reality in their traditional Instagram profiles. This is the same problem that impacts people when they see perfectly photo shopped people in magazines. The creation of Finstas shows teenagers true insecurity of exposing their imperfections, opinions, and often complaints to a greater audience.

“[Your Instagram] is a simulation of your real life,” said Anderson. “It’s a carefully curated collection of images to tell a specific story of your life.”

Finstas, however, serve as an outlet to teenagers to reach out to close friends in a comfortable atmosphere. Sophomore Meredith King feels that they help resolve issues through rants, though they can also be a place for humor, according to sophomore Mackenzie Gorman.

Even though an outlet like a close group of friends can be a good place for expressing opinions and concerns, a digital platform has flaws. Some people post about basic concerns concerning school and complaints about summer assignments, while others post about real concerns like depression.

Posting grave issues like depression online instead of talking to a therapist or counselor and creating unrealistic expectations with perfectly crafted traditional Instagram pages might create issues in teenage society.  Anderson finds that traditional Instagrams “brew the feeling of inadequacy.”

“Curated photos on Instagram cause problems like anxiety. Having a Finsta doesn’t get rid of that anxiety because you are maintaining both,” said Anderson.

Searching for self as a teenager is a real problem, but hiding self is an even greater one, even if it means hiding behind digital walls.

“It’s hard to know who you really are when you’re creating personas you have to keep straight,” said Anderson.

The lack of clarity and realism in our society proves clear, even in small things like Finstas.

“I think it’s dangerous to have two versions of yourself,” said Anderson. “It’s exhausting.”