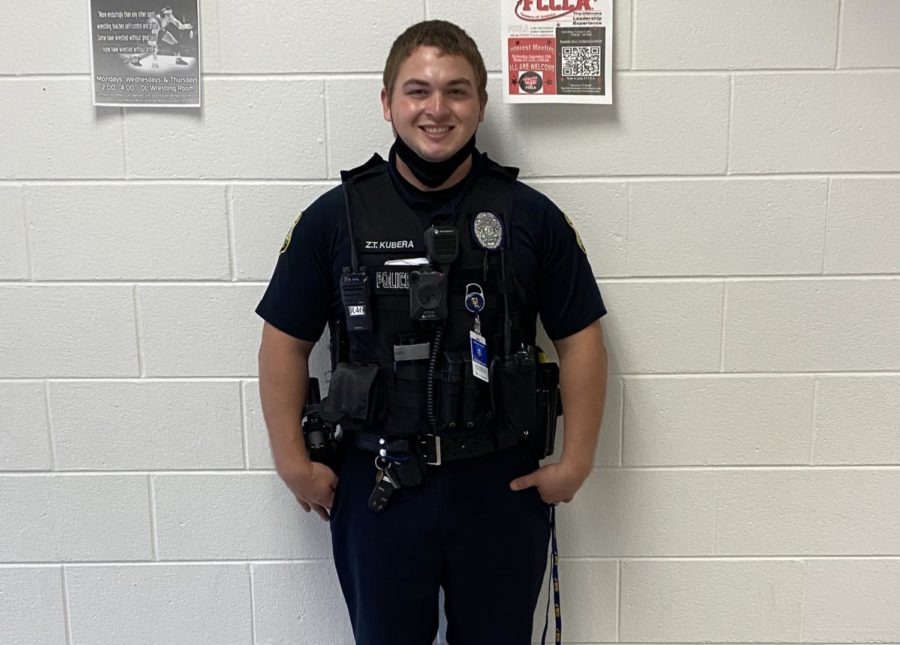 New School Resource Officer, Zachary Kubera, has been appointed to Ocean Lakes as well as multiple schools in the area to ensure a safe environment.

“I want to help build a bridge with everybody. I don’t want them to be afraid of ever going and needing help. So if they see me as someone who can do that, or even the security or teachers, and it gets to me, anyone can help them in any way they can,” said Kubera.

Kubera strolls the hallways near the gym or the front desk; when he’s not there he can be found in his office in room 169. One of Kubera’s main duties is to direct traffic in the mornings and afternoons for Ocean Lakes High School, Ocean Lakes Elementary, and Red Mill Elementary.

“I didn’t feel like sitting in an office doing the same nine to five job, doing the same thing every day. This gives me a chance to do something different every day,” said Kubera.

Kubera grew up in upstate New York, and he joined the Virginia Beach police force at 21 years old; he is now 26 years old and has been in the force for four and a half years. His stepdad motivated him to join the force when he was younger.

“He was a New York state trooper for 28 years, and I met him when I was 14, just told me all the cool stuff that he was doing, so I kind of just wanted to be in on that. He just always supported me anywhere I wanted to do in the department,” said Kubera.

According to the National Association of School Resource Officers, research has shown that schools with an SRO reduce the chances of students being involved in crimes, self-harm and emergencies, and the SRO can help de-escalate behavioral problems within the building quicker. SRO’s can also provide social services to those who need assistance.

Kubera plans to stay at Ocean Lakes for three to four years to see the freshmen class graduate.

“He’s a great guy, and we’re so thrilled to have him,” said Principal Dr. Claire LeBlanc.