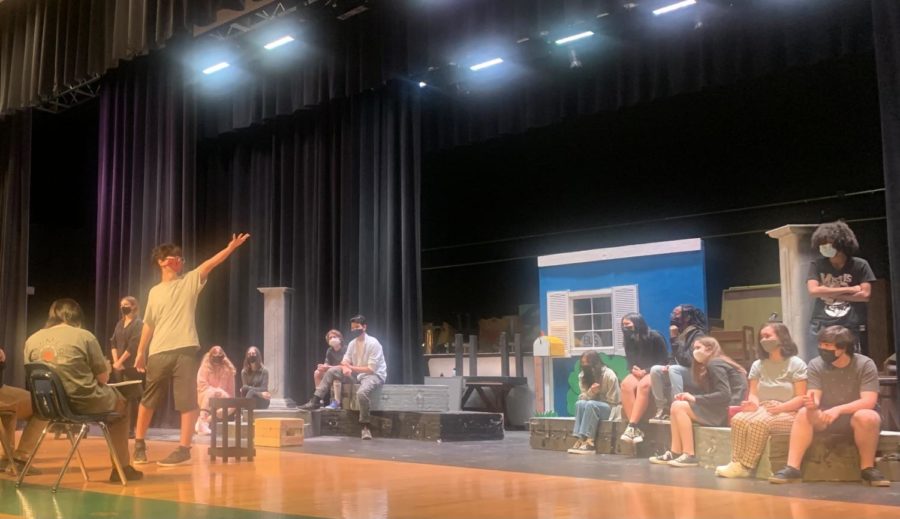 Theater members rehearse on Oct. 15 for the upcoming Caesar play that premieres Nov. 18.

The theatre company announced its first performance of the school year. Production started in early October with opening night being Nov 18. Much work has already been put in to start this year off with the classic play of “Caesar.”
To begin this year’s legacy, they have chosen to approach the performance with a twist in the play’s original duration and era, keeping the theme classic yet refreshed by being written in modern day, specifically a school with gender-swapped roles.
This performance is set in the present century, while the original play of “Caesar” is set in ancient Rome.
“Setting this play in a high school adds drama and a whole other layer to the tragedy,” said Jae Cook, a sophomore playing Marah.
Relating to the modern setting, the gender-swapped roles in this show have significantly influenced the stage and the portrayal of the characters. All main characters are now being acted out and having their rivalry in an all-girls boarding school.
“It could still be daunting for a modern audience, showing the mob mentality of the classic. It really is a thriller,” said Claude Blanchard, theatre teacher and faculty director of the play.
Other than the obvious changes that have been done, much of the classic literature and themes in the story stay the same despite the modernized scripts. The Shakespearean language is still present yet fused with current dialect.
This 16th Century performance is one of Shakespeare’s tragedies, beginning with the rebellion against Julius Caesar and ending with his death. This kind of show is not seen often in this century, as the assassination of a political leader is no longer common or publicly announced before it’s done.
“You’re getting a classic piece but with modern aspects, and I believe that alone will help the audience really feel the performance. So, don’t be hesitant about Shakespeare. You will be blown away,” said Blanchard.