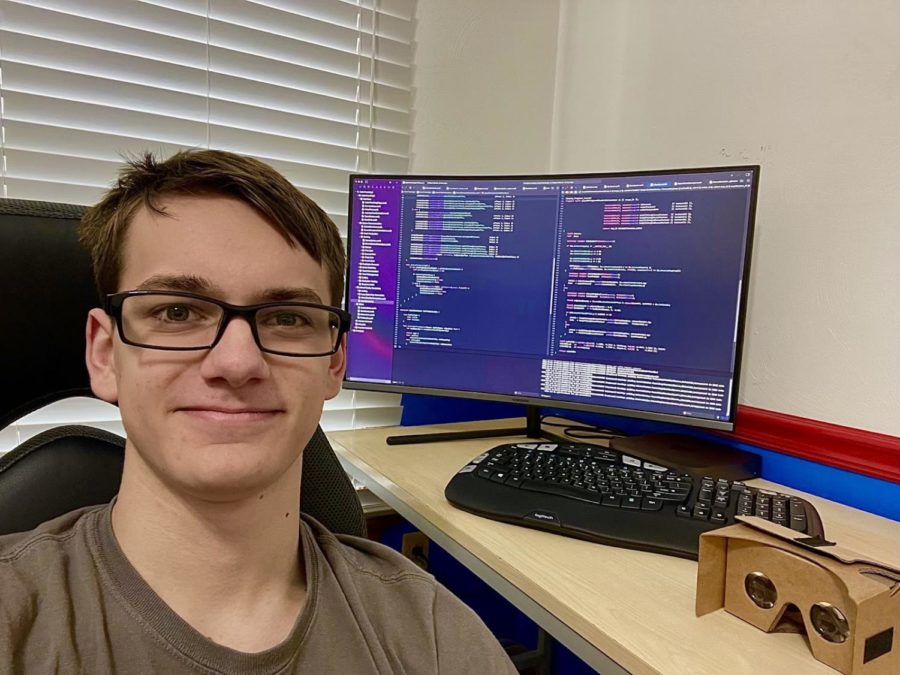 Math and Sciences Academy senior Philip Turner models his headset, coding in his house at the start of the school year to show what he created over summer vacation.

Senior academy student has created an affordable augmented reality headset and the first app to ever simulate more than three pendulums in Augmented Reality.

Philip Turner, a senior at Ocean Lakes, spent several months of his free time to create his own AR headset with Google Cardboard and an iPhone 12 Pro Max.

“I like that it is so very creative and also that he worked long hours on the coding to accomplish the tasks at hand. As far as the future, I firmly believe that the horizon is bright for Philip. His depth of understanding and focus on his areas of interest are admirable. He is doing well with setting priorities and moving forward,” said orchestra teacher Karey Sitzler.

Philip is a violist in the school orchestra who successfully auditioned and placed for symphony in Senior Regionals his freshman year.

“I knew that Philip was developing his app last spring, so this fall we spoke about it when he came back to school. Actually, I thought it was so cool that the orchestra students would enjoy seeing it and also marvel a bit that he was able to do the project. We need to support each other,” said Sitzler.

After the app was launched on Sept. 6, Sitzler promoted the app during the first week of school to share his work with the community. He created ARHeadsetKit, a software framework that lets developers make similar apps with the hopes that he can reach out to others and inspire them to make their own apps.

“I want other developers to study the source code and learn about what I’ve done and make their own apps out of it. It’s for people like me who know what smart glasses are and how awesome this technology is,” said Philip.

The app, AR MultiPendulum, is compatible with iPhones and Ipads on the app store and although it currently has only eight reviews and four recent app changes, all of the reviews are 5-star ratings.

“I don’t know if I’m going to make any big changes. I’m spending my time on making this framework, reaching out to other people and soon bringing it to Android,” said Philip.

With or without changes, Philip has paved the way for software developers to create their own AR headsets as a cheaper alternative to the ones sold by Microsoft for between $3,500 and $5,199, depending on the Hololens chosen, according to the official Microsoft website.

“Philip is bright, talented, and truly understands his part in the successes of his endeavors. He never shies away from the work needed. He always has a smile and wants to contribute to our orchestra in the best possible way. I wish him well as he embarks on his next journey in education,” said Sitzler.

For more information go to https://philipturner.github.io/first-affordable-ar-headset