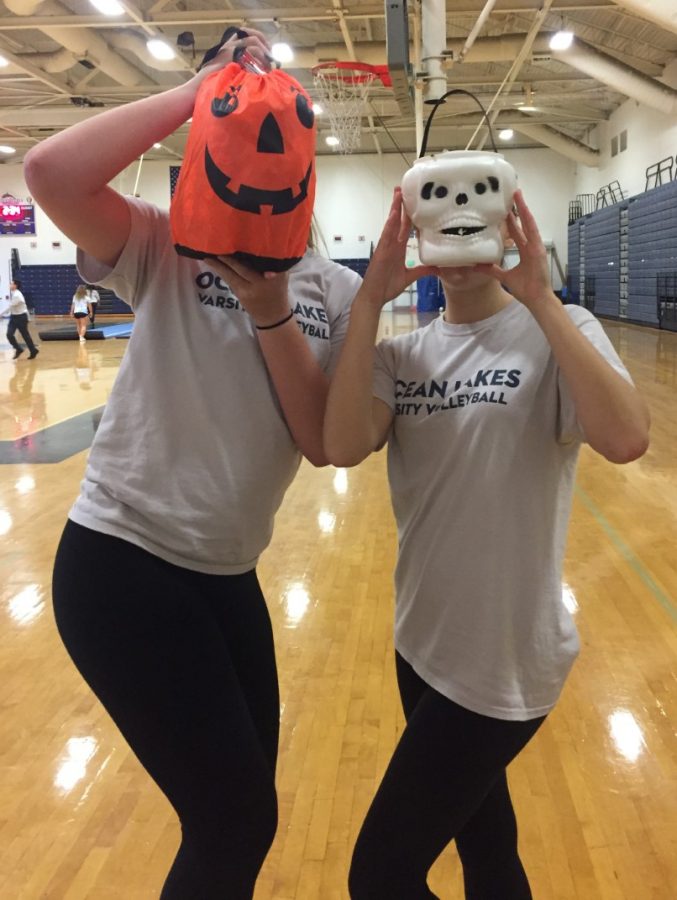 Hannah Donaldson and Maddy Delmonte play with their spooky goody bags given to them by teammates before their volleyball game against First Colonial.

Shopping for costumes, decorations, and candy for Halloween can be spooky, not just because it’s the eeriest holiday of the year, but the prices can be pretty frightening as well. Little do people know, the average American spends about $83 on these items every year, according to Fortune.com. Some stores hide deals and coupons that could be beneficial to customers in order to make more money.

Heather Lakhani, worker of 17 years at local Halloween store and online vendor, Harygul’s Halloween Planet, says that the store currently does not offer any deals.

“However, if customers download the Harygul’s app, they will receive 20% off their first purchase,” said Lakhani. “Employees receive discounts as well.”

According to Lakhani, Harygul’s offers a plethora of licensed costumes and items at a variety of prices for every type of shopper.

“Some people are willing to spend $600 on a Storm Trooper suit, while others only pay $20 for the same costume,” said Lakhani.

Michael’s, a popular store that sells decorations and craft items, has secret deals to help dedicated customers shop at a bargain.

According to Tiphero.com, to save money at Michael’s, customers can bring in coupons from competing stores such as Hobby Lobby, A.C. Moore, JoAnn Fabrics, and Walmart. They also take an extra 10% off for the coupons customers bring in. Michael’s is currently having a 50% off sale on most Halloween home decor items.

“I think it would be cool if stores, such as Michael’s, had a deal where customers could fill a bucket or a basket with a certain amount of items, and they would get the whole bucket for $20 or some other reasonable price,” said freshman Emma Carter.

Halloween lovers on a budget can save the most money by shopping for costumes at a local thrift store. Many choose to create their own costume using random clothing and other items.