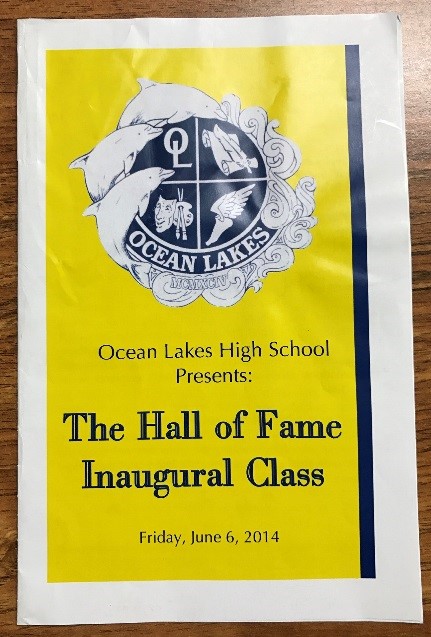 Brochure from the induction ceremony when the five inductees that best fit the criteria were recognized into the Hall of Fame in 2014. Photo by Coral Maxey.

Two years ago administration launched the Hall of Fame Inaugural Class. At its start, the school had been around for about 20 years. Former principal, Dr. Cheryl Askew, had brought up the idea to other administration that she had wants to start a Hall of Fame.
“I believe First Colonial had just had their first Hall of Fame induction, and it made me think it would be something good for OLHS to do as well,” said Askew. She said that she thought it would be a good time to celebrate Ocean Lakes’ first Hall of Fame, especially with the twentieth anniversary coming up.
The purpose of it was to recognize students and staff for great things they have accomplished, or contributions they have made.
“This was a very personal project for Dr. Askew,” said Principal Claire Leblanc. “This was something that she was not only passionate about, but wanted to do and do well.”
A committee was formed to create criteria including staff, many of which had experience in athletic and extracurricular activities. Within the criteria, three different categories presented themselves: Former student, former coach, and former contributor.
“I was pulled on board because I had coached for 25 years, and had a lot of experience with student activities, not just the coaching end of it,” said Leblanc.
Being already graduated or being out of the position for several years, having had significant achievements, been consistently successful, and having been a good role model are only some of the many requirements for eligibility.
“This allows for a variety of people who have had an impact at OL to be considered for induction,” said Askew. “I also think the criteria related to students having ended their career at OL in good standing and having been a model of good sportsmanship and citizenship are extremely important.”
The committee decided that only five applicants were going to be put in the Hall of Fame each class because it is supposed to be something special and not something that is easy to get into. New classes are not necessarily inducted every year or even every two years, either.
“That process was not necessarily an easy process, but I think at the end of the day, there was consensus on who those five members should be,” said Leblanc. “It’s probably time to induct another class.”