That’s a rap, Something in the Water proved a success 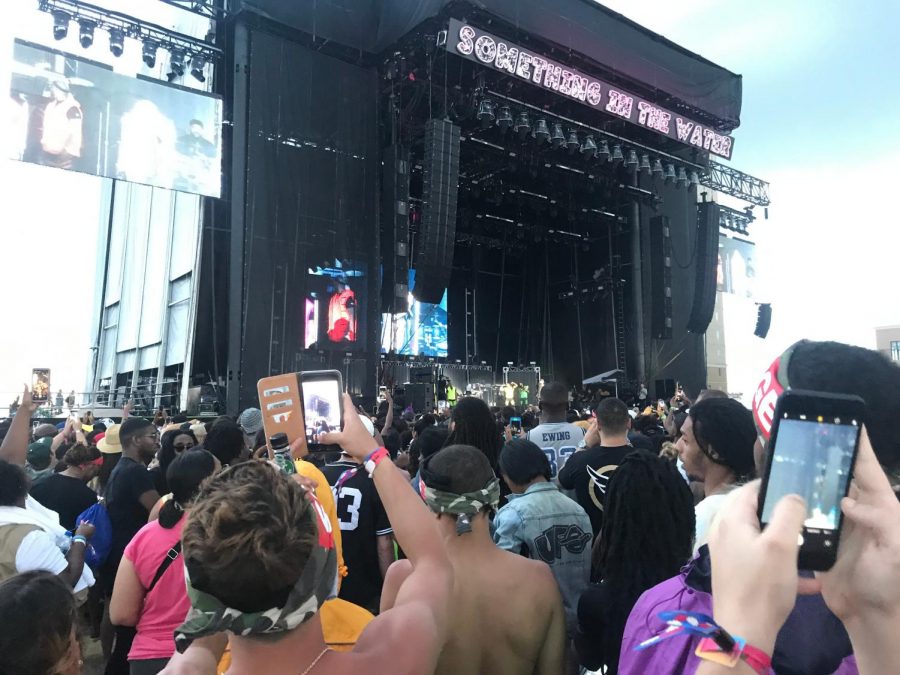 A large crowd gazes at the stage as singer Charlie Wilson performs at Something in the Water on April 28.

Though the festival started on a low note with Friday’s acts canceled or postponed due to severe weather, it finished strong.

“I understood why they would cancel the [acts] due to the severe weather, but I am disappointed that I did not see Lil Uzi Vert or Migos,” said sophomore Carter Jarrett.

Despite Friday’s cancellation, massive attendance prevailed for the next two days. Doors opened on Saturday at 12 p.m., and the day’s first act, Radiant Children, performed at 12:30 p.m. The rest of the day included a multitude of big names. Harlem rapper A$AP Ferg performed at 3:55 p.m. Colombian singer J Balvin went on at 6:15 p.m., followed by SZA at 7:20 p.m. Her set ended at 8:05 p.m.

Travis Scott was supposed to go on at 8:30 p.m., but the Houston rapper did perform not for another 30 minutes. He eventually energized the crowd with some of his chart-topping songs, such as Stargazing, Goosebumps, Antidote, and Sicko Mode.

Pharrell and Friends performed for nearly two hours. The “Friends” included more than the previously announced Snoop Dogg, Diddy, Missy Elliot, Fam-Lay, N.E.R.D, Timbaland, and Usher. Rappers Tyler, the Creator, and Jay-Z were brought out to the surprise of attendees.

Saturday ended with a DJ set by Virgil Abloh, also known as the CEO of Off-White and artistic director of Louis Vuitton’s men’s wear.

Sunday brought tons of energy when gates opened up once again at 12 p.m., and a pop-up church service was held from 12 p.m. until 8 p.m.

“The festival was the best thing Virginia has had; I wish I could tell Pharrell how much all of us appreciate him hosting this. After the festival I even Stayed back to help pick up trash on the beach,” said senior Naadia Stevens.

A main goal of the festival was to reduce the violence that has historically plagued Beach Week, and that goal was achieved as no major incidents took place during the weekend.

“I think Something in the Water was such a memorable weekend, and I was surprised to see that nothing too dangerous happened,” said senior Jayla Pol. “I hope Pharrell does this next summer.”

Pharrell had some positive words for the community at the end of his set.